You are here: Phynova > Science News > Reducose® turns fast sugars and carbs into slow ones

Reducose® turns fast sugars and carbs into slow ones 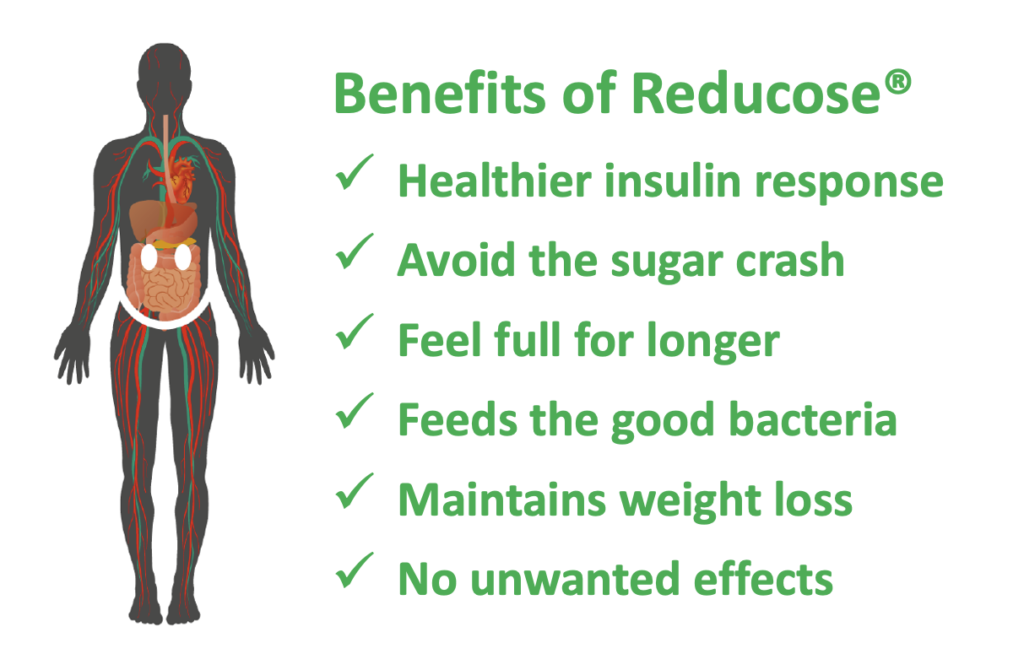 The World Health Organisation and the Food and Agriculture Organisation recommend that people base their diet on low GI foods in order to prevent common diseases such as heart disease, obesity and diabetes. The benefits of a low GI diet extend beyond this, as it can improve mental performance, reduce risks of some cancers, age-related macular degeneration and improve symptoms of polycystic ovarian syndrome[1, 2]. These benefits from low GI foods are thanks to dietary fibres, viscous fibres and resistant starches that escape digestion in the gut, but modern food processing often removes them from our food[3].

Most carbohydrates (di-, oligo- and polysaccharides) are too large to be absorbed into the body and require hydrolysis into monosaccharides like glucose to allow absorption[4]. Fibres and resistant starches are not digested for two main reasons: humans lack the enzymes required to break the beta-orientated bonds that link the glucose molecules together in the fibre, or due to the shape of the starch molecule that does not allow the enzyme access to the starch molecule to digest it fully[1].

Reducose® is a proprietary water extract of mulberry leaf and has been shown across six human clinical studies to significantly lower blood glucose and the glycaemic index of foods by inhibiting the enzymes that are responsible for digesting carbohydrates. This elegant and simple mode of action mimics what is observed when people eat diets rich in fibre and resistant starch: lower blood glucose and insulin responses due to the glucose in the carbohydrate not being made available for absorption. Reducose® inhibits these enzymes immediately in the upper part of our small intestines (duodenum) and for about an hour, which is long enough for most ingested carbohydrates to pass undigested through the duodenum and part-way through the jejunum where digestion of monosaccharides normally occurs.

After inhibiting the digestive enzymes for about one hour, Reducose® dissociates from these enzymes and unlike other ‘carb blockers’ is absorbed out of the gut into the blood stream where it is rapidly excreted unmetabolized through the kidneys. This is important from a side-effect perspective as the microbiome utilizes the same enzymes to break down undigested foods and inhibitors remaining in the gut with the food bolus will impact this activity, while Reducose® will not, simply because it is no longer present in the gut[5].

The direct effect of Reducose® is to low post-prandial blood glucose by preventing the digestion of carbohydrates, and this triggers a cascade of positive health effects, much the same as observed from low GI diets[5, 6]. The positive health benefits observed are thanks to undigested carbohydrates in the small intestine and not due to any biological or biochemical effects by Reducose®.

The ileal brake is a nutrient-triggered inhibitory feedback mechanism that induces satiety. When macronutrients bind to receptors in the ileum, the ileal brake is triggered resulting in a slowing of upper gut motility, reduced appetite, and delayed gastric emptying. These activities are mediated through the release of hormones such as peptide tyrosine tyrosine (PYY), cholecystokinin (CCK), and glucagon-like polypeptide 1 (GLP-1).

Linked to the ileal brake is the ‘second meal effect’. The second meal effect is a phenomenon where the GI of one meal can influence the glycaemic response to a subsequent meal. Having a low GI intake in one meal lowers the postprandial glycaemic response (PPGR) in a subsequent meal. This effect is thought to be mediated through several interacting mechanisms, including through the actions of incretin hormones (GLP-1 & GIP) and by the fermentation of undigested carbohydrates to short-chain fatty acids by the microbiome and their subsequent absorption[7, 8].

The benefits of the second meal effect, whilst observable as a lower postprandial glucose response, extends to weight management. The second meal effect increases the rate of fat oxidation and favours the use of fat to meet the body’s energy requirements, whilst people who eat high GI meals favour fat storage and the use of carbohydrates for energy[7, 8].

After passing through the ileum, the carbohydrates that weren’t digested thanks to Reducose® enter the large intestine where they become food for the gut microbiome. There are numerous health benefits associated with providing carbohydrates to the microbiome. They feed and nourish the bacteria in the microbiome that have a saccharolytic (carbohydrate) metabolism – Lactobacilli and Bifidobacteria are important beneficial bacteria and are almost exclusively saccharolytic. Having healthy colonic and mucosal microflora also helps prevent pathogenic bacteria invading the GI tract[9].

The beneficial effects these bacteria have in humans is due to how they consume the carbohydrates that were not digested in the upper GI. The bacteria ferment these carbohydrates and convert them into short-chain fatty acids (SCFA) such as acetate, propionate, and butyrate. SCFA have several beneficial health effects. For example, colonic epithelial cells preferentially use butyrate as an energy source and its presence in the colon aides the growth of colonocytes, which have a protective function against colonic disorders[9].

SCFA production also inhibits the growth of pathogenic organisms in the colon by reducing luminal and fecal pH. This low pH reduces peptide degradation and the consequent formation of toxic compounds such as ammonia, amines, and phenolic compounds[9].

SCFAs are readily absorbed back into the body. Circulating SCFA can improve immune functions by increasing the number of T-helper cells, macrophages, and neutrophils. They also lower the hepatic production of cholesterol through interfering with its synthesis[9].

The colonic bacteria use a range of carbohydrate hydrolyzing enzymes to produce these beneficial SCFAs and it is here that the difference between Reducose® and other ‘carb blockers’ becomes apparent. The enzymes that the microbiome uses are analogous to human glycosidase enzymes. If inhibitors of these hydrolyzing enzymes are present in the large intestine, then the microbiome’s fermentation ability is reduced, and this can lead to unwanted side-effects. Clinical studies have shown that Reducose® does not cause any unwanted gastrointestinal side-effects[5].

Lower blood glucose and insulin levels after eating, healthier weight, increased satiety, lower blood lipids and healthy gut are all benefits of using Reducose®. It’s simple, elegant mode of action restores the functionality of dietary carbohydrates by turning fast carbs and sugars into slow one by preventing their digestion. Reducose® then gets out of the way and allows the undigested nutrients to trigger a cascade of metabolic health benefits, much the same as experienced when following a low GI diet.